In an ever changing world where time moves swiftly, isn’t it great to know that some things never change?

Although Action Cleaning Equipment has been around since 1963, the company has managed to stay relevant and has grown to meet the constantly increasing demands of the pressure washer industry. In this same amount of time, many competitors have sprung up and many have fallen away. Pressure washers have become widely available through home improvement stores and online at a multitude of websites. So with all these significant changes, why does Action Cleaning Equipment remain the choice for pressure washing professionals?

ACE has changed with the times by expanding its product line to include all the newest technology. The company has moved to a larger facility as it has grown. However, there are two things which have never changed: 1) the quality of products and, 2) the same old fashioned service that earned the company’s reputation.

In 1972, Action moved to 802 Detering near downtown Houston. The location would be home for the next 45 years. Through four and a half decades, the customer base continually grew. People in the pressure washing industry liked knowing that the best selection of quality pressure washers and the best Service Department was conveniently located. No matter where you were coming from, it was easily accessible. 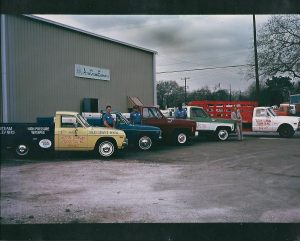 Action Cleaning Equipment in the 1970’s

Of course, things were different back then. There was no internet or home improvement store franchises. In fact, there weren’t too many pressure washer providers around. But once again, time always changes things. As new products and product lines became available, the showroom became more crowded. The ever growing customer base meant that more machines and bigger mobile units were coming in every day. ACE began to experience the growing pains from its well earned reputation. The writing was on the wall: We have GOT to move to a larger facility.

In the amazingly short amount of time between May 25th – May 28th, the company moved everything to the new location. The facility at 6010 Milwee St, Houston TX, 77092 has been exactly what was needed, both for the company and its customers.

We moved from May 25-28 and opened our doors on May 30th. We purchased the property at the end of March and spent 8 weeks remodeling before opening. We were at the original location since his dad started the business in 1972. We have a great picture of the building with trucks in front from back in the day. Iâ€™ll scan and attach it.